We did know we were moving close to one of the reputed wettest spots on earth, we just didn’t realise that so much water could fall in such a short period of time.

Five years ago we bought a rain gauge to measure more or less accurately how much water was pouring out of the sky.

Over twelve feet (4 metres) fell last year in the space of eight months (but mainly from May to August)….that is our highest recording to date!

“Did you remember to bring your umbrella?” is a daily question during the wet season. Some do, some don’t, some forget, some break, some fall apart.

Not that an umbrella is much help when the deluge is at its heaviest. Is there a break in the clouds, is it going to ease off? Not likely. So they roll up their trousers or tights, tug on their little red or blue plastic boots and make a dash for it. All the way home and many of them live a fair distance away…

And when the wet season was supposed to be over, late last year, just how many can you squeeze under one umbrella? 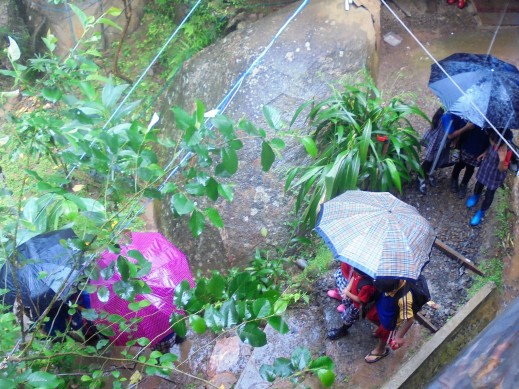 You would definitely be surprised!

And now the mud has turned to dust, it has barely rained a drop in almost five months and we gaze longingly up at the sky for those clouds to squeeze out even a few drops of moisture!

One thought on “Last year we cried, rain, rain go away… This year we plead for it to come…”