The thump almost took my breath away.

I glanced around with a chill.

Something had hit the glass of our big sliding window upstairs, close to where I was sitting.

A tiny fluff of feathery down was now stuck on the glass.

I raced down and outside, where was it?

Then I spotted a little heap of feathers and gently lifted it up. It was so small and fragilely light. My teacher mind told me that birds have hollow bones to help them fly better, so of course it was going to feel almost like holding air. But I was amazed how almost not there the slight bundle was. I cupped it in my hands and noticed its eyes were open. So was its beak and then it crooked tiny claws around my finger and just stayed perched on my hand.

Concussed? I supposed so. But definitely alive.

Amazing, I had never been this close to a really wild bird before and I took time to note its delicate black and white colouring with a tinge of yellow here and there, its curving beak and longish tail. Not just the usual neighbourhood sparrow or mynah bird, but one of the rarer species. It sat for some time just looking and presumably quite dazed. Unfortunately, I had things to do, so I gently placed it out of reach of any dog or cat and went back to my task.

When I returned minutes later, I breathed a sigh of relief that it had recovered enough to  have flown off. 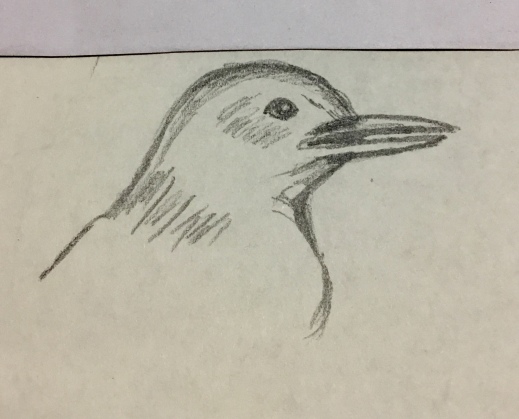